Thanks to Jenny Stuart and the New Malden Village Voice for permitting these articles to be reused as a blog.

I have a few standard walks in Richmond Park. There is enough there to keep me busy for years, but I have been often enough that I know where my dog is happy and where I can enjoy the scenery most. This time, I had parked at the Isabella Plantation car park, and was walking down towards the Pen Ponds. There is a slope on the right as you leave the car park which leads to a fenced in area, but which has a path through it. Well, as I was walking towards this slope, I realised that there was a young stag – red deer – in the area, so I had to keep Poppy under control and back onto the lead. No great problem (bizarrely, she rather likes her lead) and I was able to walk down without frightening the stag or us. And then looking up, I saw that the deer was standing at the top and was silhouetted against the sky behind.

That called for a quick snap – fortunately I had my camera out of the case and switched on already. I was keen not to just take a picture of the deer, but to give it some more interest by showing it in its environment. Again, luckily, there was a tree going across the scene that provided a good frame for the picture, and I was able to show a deer staring off into the distance, thinking about where it’s next bit of leaf would come from.

Editing was quite easy. I made sure that the tree, the grass and deer were almost black – to give a silhouette effect (and, given that I was photographing the deer against a very bright background, that was pretty much the way the picture had come out anyway). The sky needed to be more than a blank canvas and so I had to bring out some of the blue colour – there in the scene, but not perfectly captured by the camera.  I have put this image into mono as well as colour: some prefer it that way, but I like the blue sky in the distance.

A time to remember that being ready to take a sudden photograph is sometimes well worthwhile. 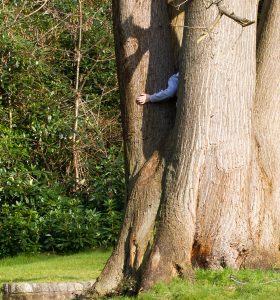 I’d be the first to admit that this is not a great artistic picture. I was in Claremont Gardens – another National Trust property close to us. These gardens are fairly small (you can walk around them in less than an hour even if you stop to enjoy them while you’re going around) but there are quite a few interesting things there. A large lake with gulls, ducks, swans and other birds is always good to look at and gives a lot of photographic opportunities. The National Trust website describes it:

“Many of the great names in landscape design history played a part in the creation of the estate. Over the years Sir John Vanbrugh, Charles Bridgeman, William Kent and ‘Capability’ Brown all put their own distinctive stamp on the pleasure grounds, and in 1866 Queen Victoria herself acquired the estate to save it from development.

Today there are still many unique and unexpected features to discover, including the large turf amphitheatre, serpentine lake, grotto, Camellia Terrace and Belvedere Tower.”

And, in addition to all that, there is a large section of woods which, in the Spring, are full of snowdrops and daffodils.

This day, however, it was the trees that fascinated me – it was a nice day and families were there and playing in the gardens. This particular tree has a split trunk, and a caught this view of a child playing inside the split. For all the world, it looks like the tree is swallowing her (him?) up and the child is trying to pull themselves out of danger; a fun picture that makes me smile when I look at it. This is just a grab shot – taken without any planning or much thought: but I had noticed the children playing in the trees and had seen that they could vanish into this particular tree. So, I was ready when the chance came to take this photo. Again – I hope this will become a habit, but I have my doubts. 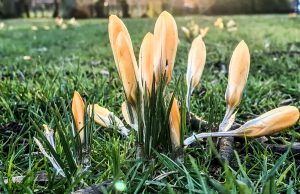 You may remember that I sometimes take my dog, Poppy, for a walk in Beverley Park – I have shown some photos of the trees on the early sunlight before. But not everything has to be big and grand to look interesting and worth a picture. These small crocuses were beginning to come out this February morning; I didn’t have my “proper” camera with me … no matter, the iPhone has a decent one. There certainly are limitations with a phone camera (and the resolution (pixels) is often one of them). If you want to crop in on the image, then there will be even fewer spots of colour and light to show and the picture can look really soft and messy. However, better to take a photo with the phone than to miss this opportunity! And the quality is fine.

I let Poppy carry on running around (although, to be honest, if I am taking a photo she often comes along and sits and waits for me to finish so that I can throw the frisbee for her) and lay down on the ground to get a better perspective on the flowers. From above or crouching would have been easier, but there really wouldn’t have been much interest if I had done that. A photographer’s life can sometimes involve getting down and dirty! Oh, art, you are such a hard taskmaster.

And I wanted to get close to the flowers. Smartphones don’t have a great depth of field but being low down and very close (30-40 centimetres), meant that there was a nice blur beyond the flowers. A very necessary blur, too, as there are houses in the background which would have spoiled the effect if they had been in focus.

I don’t think it is a truly great photo, a bit messy, but it does capture a lovely moment. Spring is on its way!

This month I have put in one photo that I really like and has done well in club competitions – the deer in Richmond Park, and two which are nice, but not competition winners. And that is important, because winning competitions isn’t the point of photography: I like to take pictures that I enjoy, that you enjoy and that sometimes say something important.

TheMalden Camera Club meets on most Thursday evenings at the Library in Kingston Road. We are a friendly group and love our photography. Come along one evening. You will be very welcome!